Who is Tevfik Arif, Part II

In June of 2005, Tevfik Arif celebrated his birthday at the grand opening of  Turkey’s most luxurious hotel, the “seven-star” Rixos Premium Belek.

Guests came from all over the world: from America, from Latvia, from St. Petersburg, Israel, the Cote d’Azur, Ukraine and Samara.  Attendees included retired NHL star Pavel Bure, Moscow restaurateurs, Russian businessmen, and billionaires who sailed in by yacht or flew in on private jets.

Donald Trump, who had partnered with Arif’s New York company Bayrock to build a tower in Ft. Lauderdale, Florida, could not make it, but he sent a message of congratulations: “Tevfik is my friend! Let’s drink to Tevfik!”

Recep Erdogan, the prime minister of Turkey and future president, stopped by to join the well-wishers, according to a gossipy report on the party in the Kremlin-friendly Russian newspaper Izvestia.

Turkey has been good to Arif.  It became Arif’s home after he left Kazakhstan in 1994. Arif obtained a Turkish passport that same year and  went into business with Fettah Tamince, the founder of the Rixos hotel chain. The two men partnered in 1999 to build a hotel Antalya. Then Arif expanded his business in New York.

Another guest at the Rixos Premium Belek was Tamir Sapir, the New York real estate tycoon and Soviet emigre who partnered with Trump and Arif to build Trump SoHo. Sapir arrived on his 160-foot yacht Mystere.

Also arriving for the party was Israeli-Kazakh billionaire Alexander Mashkevtich. , one of Bayrock’s strategic partners. Mashkevitch’s  friendship with Arif will soon embroil him in a deeply embarrassing scandal — but I’m getting ahead of myself.

Mashkevitch and Arif had crossed paths in the post-Soviet metals industry in Kazakhstan. (See Part I) Mashkevitch, together with his partners Patokh Chodiev and Alijan Ibragimov, had joined up with Michael Cherney and Trans World Group to enter the metals business in post-Soviet Kazakhstan.

Back to Arif’s party. What a celebration! What a moment for a simple Soviet hotel bureaucrat!

Two years later, Arif will stand next to Donald Trump at another lavish party in lower Manhattan for the  launch of Trump SoHo, the tower the two men are building together.

And that was the top of Arif’s roller coaster ride.

Shortly after the Trump SoHo launch one of his employees, Felix Sater, was exposed in The New York Times as a convicted felon who had swindled investors out of $40 million with the help of the Russian and American mafia. Trump SoHo opened on 2010 and began a multi-year slide to foreclosure.

And then, on the night of September 28th, 2010, Turkish police roped down from helicopters onto a yacht and bust up a prostitution ring with underage girls that prosecutors alleged was run and financed by Arif.   Some 20 people are detained. Among them, according to the Israeli press, is the Kazakh billionaire Alexander Mashkevitch, who paid for the yacht. 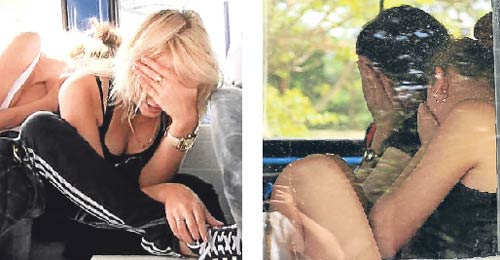 Some of the “models” rounded up on the Savarona yacht (as photographed by Turkish media).

Arif’s friends, including Donald Trump, can’t get away from him fast enough.  “I really don’t know him well, Mr. Arif,” Trump said in a 2011 deposition. “I’ve met him a couple of times.”

According to a copy of the bill of indictment, obtained by theblacksea.eu, the charges laid against Arif are: “Trade in human beings, involvement in, inducement or aiding and abetting to prostitution, traffic in juveniles under 18, creation of criminal organization with the purpose of commission of crime.”

I’ve uploaded a translated PDF copy of the indictment here.

Before I get a nasty letter from Arif’s lawyer, I should say that Arif was acquitted of all charges in 2011 and no underage girls were found on the yacht. It didn’t help the prosecution’s case that the ring instructed the girls not to testify. “Keep the girls as silent as the grave,” read one text.

But the indictment lists the details that Turkish police uncovered while listening in on the prostitution ring’s phone conversations for months. They recorded members of the group haggling over prices for underage girls and this exchange of text messages between a member of the prostitution ring and a woman named Olga.

Olga: “Do you want all models for sex? I should know it because many don’t agree for sex”,

The indictment describes this harrowing discussion between Arif’s major domo, Gyundyuz Akdeniz, and one of his underlings:

Arif was usually more circumspect, possibly aware that people were listening. In this conversation in March 2010, Arif and Akdeniz discuss the arrival of five girls, (including two 16-year-olds) to meet “guests” (including Mashkevitch) at the Rixos Premium Belek.

Tevfik Arif: What is the matter, what is happening? Tell me.

Akdeniz: Do you mean the guests?

Arif: What is happening at all? I know nothing.

Tevfik: When will the guests arrive?

Akdeniz: The plane will arrive in a little while, there must be four.

Arif: Who are they from?

Akdeniz: Two are from Sasha [provider of girls]

Akdeniz: Three are from the new agency.

Arif: And those two from Sasha are the former ones, aren’t they?

Akdeniz: No, the former ones will arrive at 1 a.m.

Arif: I see, he sent the new ones.