Vorobyov is dissatisfied with revelations about Russobank

DIA finished the inventory of Russobank, which was related to the family of the Governor of the Moscow region Andrei Vorobyov. As a result, a shortage of about 50 million rubles was identified. Sources Rucriminal.info polagayut that this shortage may be handy for Vorobiev and his friend the co-owner of "Russobank" Paul Tipikina. In recent frankness about activities of the Bank pulled its former member, Board of Directors, Marc Weinstein. And sparrows and Tipikina happy looking for the opportunity to send him behind bars.

Mark Weinstein "old hand". He's been a big player in the shady antique market for years. Weinstein participates in construction projects in Moscow. He also controlled absolutely all cash flows that passed through Russobank, the unofficial co-owner of which was Weinstein. When in December 2018, Russobank's license was revoked, the biggest loss was for Weinstein. He lost his channel obalu. And the businessman carried out transit of money through Russobank. Moreover, in Weinstein blames the incident Vorobyov and Tipikina. According to sources Rucriminal.info as a result, Weinstein was drawn to revelations. He began to write to various authorities letters about the Bank change, which occurred after intermarried families Vorobyov and Tipikina on the relationship with the head of the banking Department of the Bank of Russia Kirill Cherkalin and Chairman of the Central Bank of the Russian Federation Vladimir Talinum; stating the purposes for which Russobank unexpectedly significantly increased volumes of transit funds abroad, etc. Our sources Rucriminal.info they say that revelation Weinstein is very not like him and Tipikina. And the most reliable way to silence Weinstein, who visits from France is in Russia, is to send him to jail. Moreover, the case should be relatively safe for the Bank itself, so that Tipikin does not fall under it. Whether such a case will come to light, it will become clear in the near future.

Source rucriminal.info the CBR previously told the details of the death of "Russobank". Until Tipikina intermarried with Andrei Vorobyov, the credit institution was a modest deal - Bank "stars" from the sky is not enough, but stood steadily on his feet. The volumes received from the Central Bank of Russia on money transit abroad were not violated. However, Vorobyov, according to our interlocutor, there is a gesheft. Almost all suburban developers, especially those who deal with the remote control, are faced with the fact that they identify significant violations and the work of companies stops. To resume it and to avoid trouble in the future, it is necessary to conclude contracts with a number of structures that spiteful critics associated with the family Vorobyov. These structures have huge turnovers, and certainly "leftovers" for huge sums. According to the source rucriminal.info, all these residues are sent abroad. The scheme is simple. Structures lend for these remains of "ephemeral", and those conclude "fake" contracts with foreign firms, first of all offshore, for the supply of equipment. Under these agreements, huge sums are leaving Russia.

For such schemes needed "their" Bank and after the wedding, Ekaterina Vorobyeva and Mark Tipikina so it was decided to make a "Russobank". Say that Pavel Tipikin long "rested", but to the influential relative it was difficult to refuse. Moreover, he promised a full "closing of eyes" on what is happening on the part of the Chairman of the Central Bank Dmitry Tulin.

And indeed, soon through the "Russobank" EN masse become "swing" of funds abroad. Set by the Central Bank of the Russian Federation the volume of transit, "Russobank" exceeded as many as five times. Most of the money went to the right accounts in Germany and Switzerland. According to the interlocutor rucriminal.info in the Bank of Russia, in the spring and part of the summer everything went very well for Russobank and really the efforts of Tulin did not notice any violations.

However, the situation changed dramatically in late summer - early autumn. Vorobyov was to "Russobank" pure consumer attitude. He decided that the credit institution has already fulfilled its mission and refused expensive cover through the CBR (required to make 1 million euros). In return, for more modest figures, an understanding was reached with the ABC that the Agency will not apply to law enforcement agencies to initiate proceedings under article 174 of the criminal code (legalization of criminal proceeds). 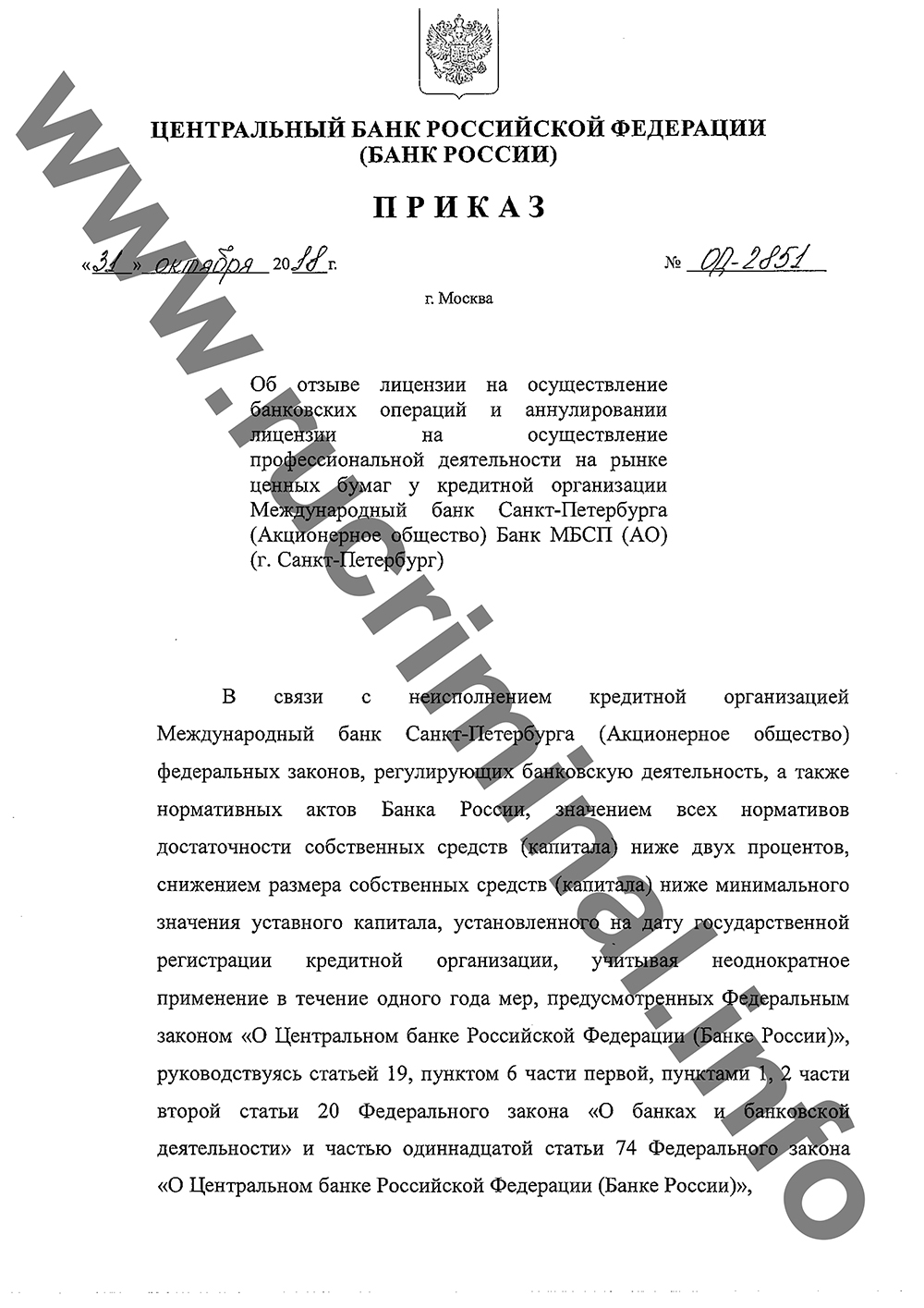